‘Make Some Noise for Australia’ with Nick Kyrgios 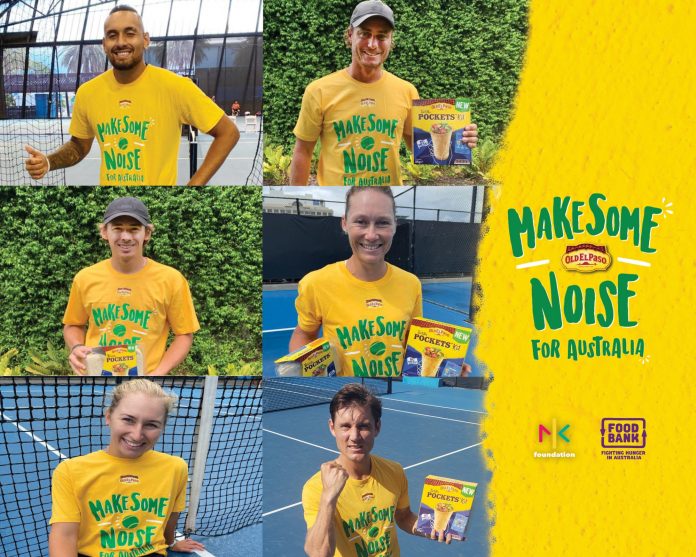 Old El Paso and Nick Kyrgios are doubling up to ‘Make Some Noise for Australia’.

The aim is to unite fans around all Aussie pro tennis players ahead of their home major, and help donate Mexican meal kits to those in need, via Foodbank Australia.

Due to there being limited crowd numbers at Melbourne Park this year, Old El Paso and Kyrgios are finding a new way to create a meaningful connection away from the stands.

Every time* an Aussie player plays a match in Melbourne; Old El Paso and the NK Foundation will donate 100 meal kits to support vulnerable Australians via Foodbank Australia.

The players will be aiming to connect fans in helping increase their Foodbank meal kit donation tally by asking them to share the #MakeSomeNoiseForAustralia social video on Instagram.

One share by a fan equates to one extra meal kit being donated**.

“As tennis players, we draw off the energy of a crowd and it’s definitely going to be a different experience this year,” says Kyrgios.

“The #MessFreeChallenge was a huge global success and I’m calling on my fans to help get behind our Aussies once again and support those in need across the country facing food insecurity.”

Managing Director at General Mills Australia, Peter Everett says that they have already reached 12,500 Mexican meal kit donations during the recent lead in tournaments at Melbourne for the 2021 Summer of tennis.

Kyrgios continues, “During the upcoming summer of tennis, I’m encouraging Aussie fans to #MakeSomeNoiseforAustralia for our players to support donations for Foodbank Australia through the NK Foundation. It’s a no brainer,” he says.

CEO of Foodbank Australia, Brianna Casey says, “The past 12 months have been a difficult period for all of us, but in particular it’s been extremely tough for vulnerable families who were already struggling to put food on the table before 2020.

“We invite all Australians to get behind this terrific initiative and of course cheer on our tennis stars.”

*All Australian tennis professionals playing a tour match across singles, doubles, mixed doubles and wheelchair events between 31st January to 21st February 2021
**Old El Paso via the NK Foundation will donate up to 25,000 meal kits during the 2021 Summer of tennis.