Ramadan kareem! Have a generous Ramadan 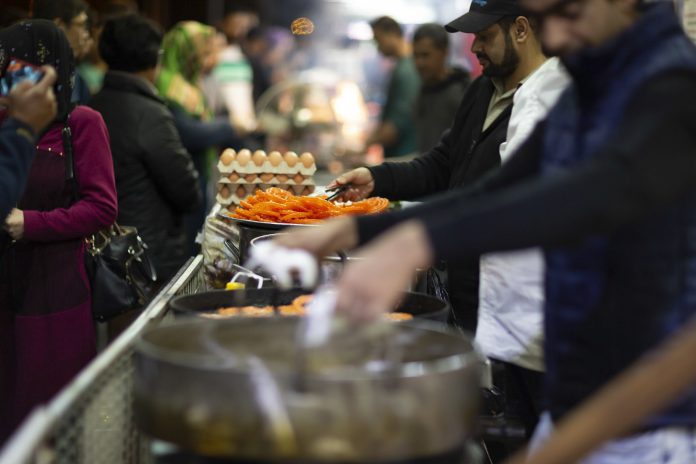 Islam is the most prominent non-Christian religion in Australia, growing 27% at the last Census.

Observed by Muslims worldwide, Ramadan is a holy month of fasting and reflection. Adult Muslims (with a few exceptions) fast from dawn to sunset throughout this period, which lasts 29 or 30 days, from one sighting of the crescent moon to the next. This year, Ramadan will be observed in Australia from the evening of 2 April to 1 May.

As fasting takes place during daylight hours, the meals taken before and after this time are of significance. A pre-fast meal, the suhur, is taken before dawn, ahead of beginning the first prayers of the day. At sunset, the fast is broken with the iftar. Traditionally, three dates are eaten to break the fast, but this is generally followed by a feast of various foods.

Iftar is often enjoyed as a community, with Muslims gathering with friends and family to break their fast together.

Lakemba’s Haldon Street in western Sydney has become popular for those breaking their fast and experiencing a wide range of food in one location, says City of Canterbury Bankstown Mayor Khal Asfour.

“Ramadan Nights Lakemba has grown over the years into one of the state’s most significant culturally diverse festivals,” he says. “It’s a month-long celebration of culture, where Lakemba’s Haldon Street is transformed into a vibrant global food bazaar running from dusk to dawn.

Attendees can enjoy traditional foods associated with Burma, Syria, Lebanon, India, Africa and other locations, cooked by the many local food vendors, with the popular camel burger being prepared on the many street barbecues.

Over the years, the event has grown by word of mouth. Due to the pandemic, the last event held was two years ago, attracting more than 250,000 people, with 73% of them coming from outside the Canterbury Bankstown area, keen to enjoy a unique cultural experience.

“It’s expected the return of this year’s festival could see double that number of visitors and bring more than $5 million into the local economy,” says Mr Asfour.

Read more about Ramadan in the March issue of Retail World.