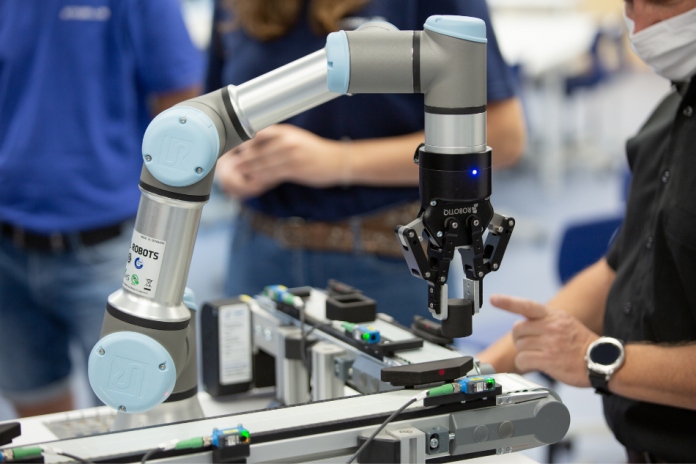 The recently discovered Omicron variant is responsible for some of the highest number of Covid-19 cases reported in a single day in Australia since the onset of the pandemic.

Forced to either halt production or work in isolation, local manufacturers are subject to ongoing production and supply chain issues with key supermarkets such as Coles and Woolworths currently being affected.

While many experts cite 2022 as the year for economic recovery, Universal Robots Asia Pacific Regional President James McKew argues that the economy can no longer sustain delayed supply chains and erratic business operations.

“To this end, automation is the best solution,” he says.

“We have seen suppliers both big and small look to automation as a solution. Social distancing, isolation and a lack of ‘hands on the ground’, have all led to a sharp uptake in automation – and more specifically collaborative automation.”

Collaborative robots (cobots) can work safely alongside humans, boast a small footprint and are easy and cost-effective to deploy.

“There certainly is an appetite for automation locally. While in the past many companies couldn’t compete against their Asian counterparts in terms of price, automation has become a solution to producing efficiently and competitively,” says Mr McKew.

Addressing issues around labour shortages and disruption to supply chain and production, Mr McKew believes that cobots will surge in popularity in 2022. Recent studies by Market Watch forecast the global cobot market to grow to US$ 36.5 billion by 2030, registering a compound annual growth rate (CAGR) of 42% during the forecast period from 2022 to 2030.

“There is certainly an appetite for automation locally. We saw steady uptake in cobots in 2021 and reached an exciting milestone of selling our 50,000th cobot globally,” says Mr McKew. “This year, we anticipate increased demand by both SME’s and large corporations to ensure that they can still meet rising demand by consumers.”

Mr McKew adds that two key requirements by manufacturers is that of remote access and 24.7 operations, both of which can be met by cobots.

“Heightened demand for cobots drives our company to continuously redefine automation through innovation,” he says.

Two of the greatest benefits of cobots is that of space savings and flexibility.

“Manufacturers looking to save on space and budget will benefit greatly from having cobots on the factory floor,” says Mr McKew. “They can be moved around and reprogrammed to accommodate a range of tasks.”

Interestingly, Mr McKew adds that there are millions of automatable tasks that are currently being done by humans.

“Allowing workers to move from dull, dirty and even dangerous jobs into roles that foster creativity and problem solving will go a long way to ensuring business continuity and happy employees,” he says.

Mr McKew believes that 2022 will be defined by collaboration.

“With Covid-19 vaccinations in full swing around the world, the global economy is opening up and it’s time to collaborate. Developing strong partnerships and collaborating within your ecosystem is the strongest value proposition that a company can deliver in 2022,” he says.

“Delivering value to customers is integral to a business’s success and in a competitive field such as ours, working in silos is not an option. Collaboration is in our DNA, and we pride ourselves on the reliable backing of a strong UR ecosystem comprising of distributors, UR+ partners and integrators around the globe.”

We are officially ushering in a new era of Industry 5.0.

While experts argue that Industry 5.0 will be a vision rather than a reality in 2022, the upward trajectory of cobots may indicate otherwise.

“Industry 4.0 remained a buzzword for quite some time and the initial uptake was slow. However, in an increasingly connected world, largely fortified by the uncertainty around Covid-19 lockdowns, the adoption of technologies has accelerated rapidly,” says Mr McKew.

Even with all the technology advancements in the world, the need for human talent in a business cannot be denied. Mr McKew says that cobots are designed to empower change in the way which work is done, arguing that “people should be working with robots, not like robots”.

“An aging workforce and a change in career choices by the younger generations has influenced the sector as we know it,” he says. “People are questioning the kind of work that should be done by humans; they no longer want to perform dull, dirty and dangerous jobs.”

Dispelling the myth, Mr McKew says that robots are not there to take away humans’ jobs but rather to allow humans to focus on meaningful tasks that provide job satisfaction and benefit the business’s bottom line.

“We now have the opportunity to entice workers through automation. Employees are looking for opportunities to be creative and problem solve, and this can be done by working alongside cobots. It creates attractive employment positions within manufacturing,” he says.

Speaking to labour shortages, Mr McKew believes that cobots ticks all the boxes for companies looking to increase their output but grappling with labour issues.

There has been a notable increase in collaborative automation competitors in recent years.

“However, we strongly caution companies to do their homework before signing on a new supplier. The need for efficiency, collaboration and increased output can only be achieved through quality. This remains the key differentiator for any business in 2022.”