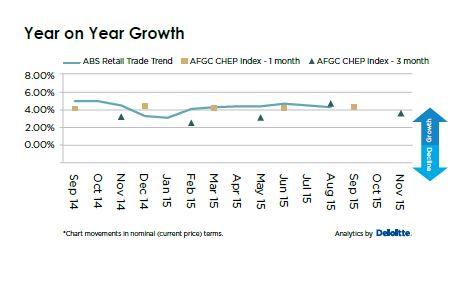 The Australian Bureau of Statistics trend data indicates that the consistently strong food sector saw year-on-year sales growth weakening to below three per cent in August.

“We are currently seeing weaker food price inflation domestically because of a range of factors, including below average income growth over the past three years and a slowing in population growth,” Australian Food and Grocery Council CEO Gary Dawson said.

“However, at the same time, the lower Australian dollar has seen a 28 per cent surge in Australia’s food and beverage exports in 2014-15, as reported in our annual industry snapshot ‘State of the Industry 2015’, underpinning growth in the food and grocery sector despite challenging economic conditions.”

The AFGC CHEP Retail Index is a collaborative project between the Australian Food and Grocery Council and CHEP Australia, powered by Deloitte. The index uses CHEP transactional data based on pallet movements and is a lead indicator of Australian Bureau of Statistics Retail Trade Data.

The next AFGC CHEP Retail Index will be released in late January, 2016. 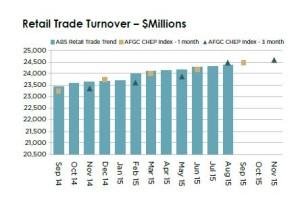 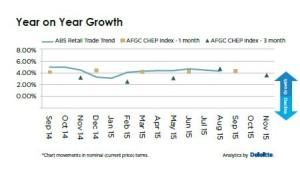