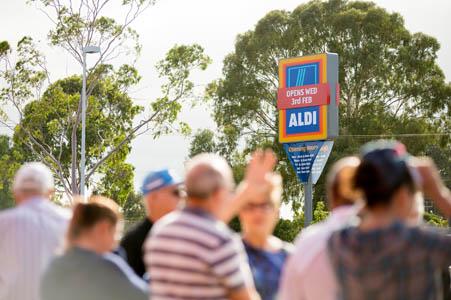 South Australian shoppers had their first taste of ALDI this week, with stores opening in the Adelaide suburbs of Parafield Gardens, Hallett Cove, Seaford Heights and Woodcroft on February 3.

“There is a strong appetite among South Australians for an alternative place to shop and we’re eager to show them the significant benefits that can come from shopping at ALDI, both for their wallets and lifestyles,” ALDI Managing Director South Australia Viktor Jakupec said.

The South Australian stores have adopted ALDI’s new-look format now being trialled on the eastern seaboard, which the discount supermarket group says is bringing innovations to the shopping experience for SA customers.

“We’ve been listening to existing customer feedback on the eastern seaboard and believe these upgrades will make it even easier and more enjoyable for South Australians to shop with us,” Mr Jakupec said.

Premier Jay Weatherill welcomed ALDI to the state at the launch of the first four ALDI stores of 50 planned in SA – which he described as “a massive vote of confidence in our state’s growing retail sector”.

“About 900 hundred new jobs will be created as ALDI roll out their outlets across the state,” he said “This is particularly good news in areas like the northern [Adelaide] suburbs which are being hit by a declining manufacturing sector. The state Government has been pleased to support ALDI in the lead-up to today and we look forward to the increased competition they will provide – which is a win for South Australian grocery shoppers.”

ALDI already maintains long-term relationships with South Australian suppliers, which have provided groceries for its stores on the eastern seaboard. In 2015, ALDI sold around $160 million worth of grocery products from South Australian businesses.

In addition to its 12 new supplier relationships, ALDI’s continued expansion will see more opportunities for South Australian businesses to partner with it to bring the grocery offering to the residents of SA.

ALDI’s next SA stores will open in March at Kilburn, Modbury, Noarlunga, Mount Barker and St Agnes, with a total of 16 SA stores expected to be open by the end of 2016.