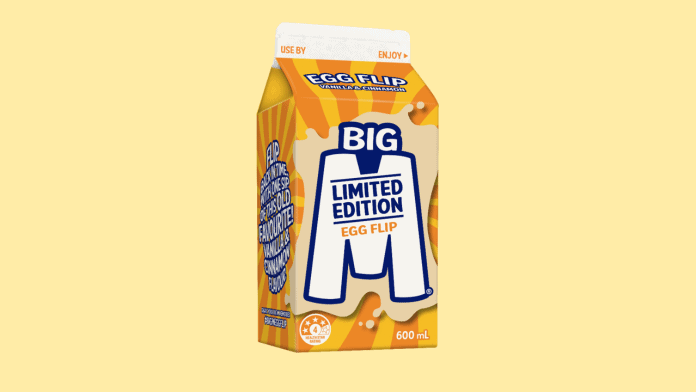 The Big M Egg Flip was loved by Aussies in the 1980’s and when it disappeared from milk bar fridges in recent years, a cult following began to form, with fans regularly contacting Big M to demand they bring the flavour back, according to the brand.

Big M Egg Flip is Australia’s take on Egg Nog, with a familiar vanilla taste, a hint of cinnamon flavour and fresh Aussie milk, launching in stores this week.

“When Big M asked its social followers which nostalgic flavour should make a comeback, nearly 60,000 fans voted, with Egg Flip the clear winner.”

Bega Marketing Director Sharon Winton explains that the growing demand for Egg Flip could not be ignored any longer.

“Big M is a true Victorian icon and we have never seen passion and demand for a flavour to return quite like what we’ve seen for Egg Flip,” Ms Winton said.

“During Covid, shoppers flocked to stores looking for nostalgic flavours and we’ve been blown away by the anticipation for Big M Egg Flip, so hope Victorians enjoy a trip down memory lane with the return of our most demanded limited-edition flavour ever!”

Big M Egg Flip is available for a limited time at Coles, Woolworths and independent grocers exclusively in Victoria.