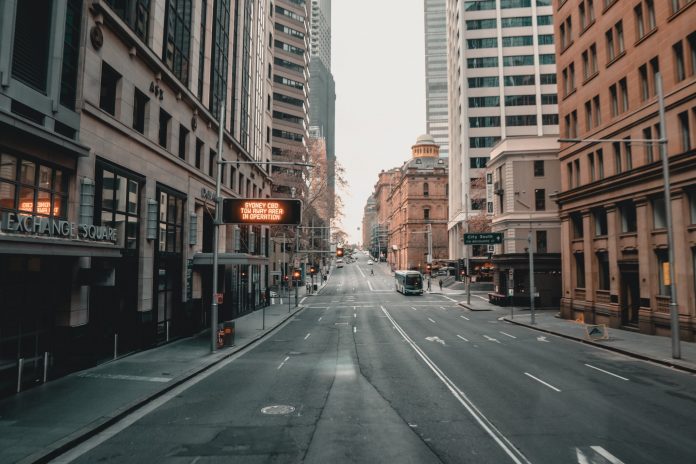 An analysis of movement data in Australia’s capital city CBDs since the Covid-19 pandemic began shows movement in the CBDs of Sydney, Brisbane and Perth all plunging over the last week as all three were placed into lockdown to deal with the latest outbreaks in each city.

The average 7-day movement level in the Sydney CBD last week was at its lowest since the pandemic began more than a year ago at only 11% of pre-Covid-19 averages. This is a drop of 48% points since movement levels reached a 2021 high of 59% of pre-pandemic averages in the Easter holidays in early April.

There were also record low movement levels last week in both the Brisbane CBD, at only 23% of pre-pandemic averages, and Perth CBD at only 25%. The movement levels in Australia’s 3rd and 4th largest cities dropped rapidly after the respective Premiers announced snap lockdowns just over a week ago.

The average movement levels in the Melbourne CBD have increased by 10% points to 22% of pre-pandemic averages since the recent lockdown of the city with mandatory mask-wearing in offices and factories only ending today (9 July). Despite this increase movement levels in the Melbourne CBD remain slightly below the averages in both the Brisbane and Perth CBDs.

Unsurprisingly movement levels are highest in the only two state capital cities to avoid recent lockdowns at 45% of pre-pandemic levels in the Adelaide CBD and at 40% in the Hobart CBD last week.

Adelaide has been the ‘closest to normal’ of all capital cities for over five months now with average movement levels not dropping below 40% of pre-pandemic averages this year.

“Until a large majority of around 80% of Australian adults are vaccinated against Covid-19 we are at a continuing risk of drastic measures being taken that provide a huge hit to businesses attempting to recover from the pandemic without the level of support provided during 2020,” she says.

The latest vaccination figures from the Health Department show over 8.6 million vaccination doses have so far been administered to Australians covering around a third of the adult population.