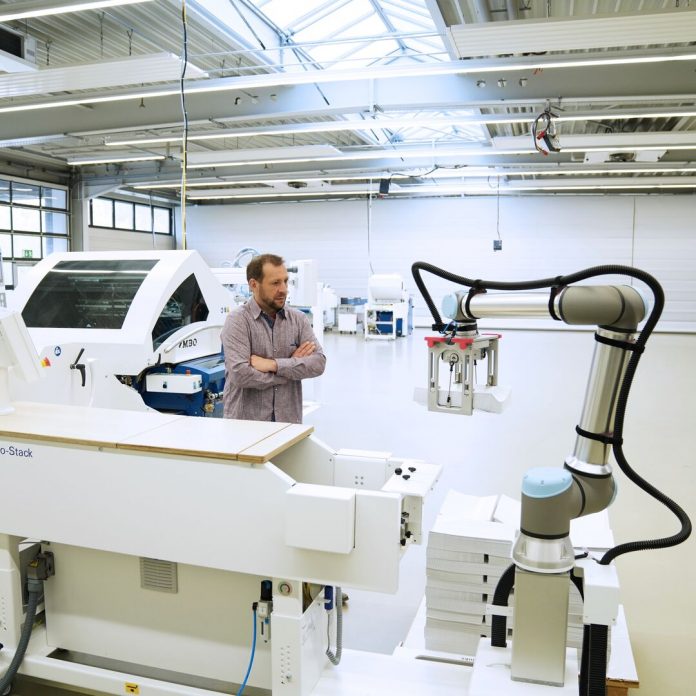 Misconceptions continue to linger as workers still view advanced automation as a threat to their employment. However, James McKew Regional Director for Asia-Pacific at Universal Robots believes that this couldn’t be further from the truth.

“The proof lies in the name,” he says.

Collaborative robots, fondly known as cobots, work safely alongside humans and as the name suggests, it is all about collaboration.

“Cobots are not a threat to human labour, they help to enhance the quality of production and the ability for humans and robots to collaborate” he adds.

According to Mr McKew, the fear of robots taking over is natural. However, he says that Universal Robots was founded on “‘Empowering People’ and shifting from ‘people working like robots’ to ‘people working with robots”.

When some think of robots, they cast their minds back to those seen in the movies. However, in the manufacturing environment “their purpose is to guide people who are capable of managing production processes and get them to manage robots that do the dull, dusty, monotonous and non-creative aspects of production processes.”

He adds that cobots should not be confused with industrial robots. “Cobots are designed to be human-friendly, they have systems on-board that can detect humans and they do not need to be caged”.

“Cobots will not hurt humans whereas industrial robots may. They are easy to use, easy to program and lightweight. In fact, even operators with limited programming skills can become cobot programmers,” he explained.

Now, in a time of ongoing lockdowns, border closures and heightened concerns around health and safety, cobots allow for “business as usual” – even in the most unprecedented times.

Adding to this is the reliance on a global supply chain by local manufacturers who are changing their production over to bring manufacturing home and ensure business continuity.

In addition, cobots allow production workers to start mastering robotics and training cobots to do the dull and monotonous jobs that talented and dexterous humans should not be doing.

With an aging population in the manufacturing sector and fewer young people wanting to do manual factory tasks, cobots are shifting are helping to transform this space into a more attractive working environment for the younger workforce.

“They now have the ability to program and manage cobots which makes manufacturing a desirable career choice for the future.”

What the future holds

He explains that many machines can be tended by several cobots while a person is left in charge of managing all of these.

“They program them, optimise them, and determine if there are more creative ways that the cobots can be used to enhance production output”.

According to Mr McKew, Universal Robots is on a journey to “shift humans who are working like robots to humans mastering robots themselves.”

The opportunities are immense for countries to resume production. The pandemic has taught countries that strategically sourcing away all production is not actually very strategic.

“Cobots along with talented manufacturing workers provide companies with massive opportunities for efficient reshoring in the post-pandemic world.” he concludes.

On 9-10 November, Universal Robots will once again host the largest virtual collaborative robot (cobot) exhibition in the Asia Pacific (APAC) region – Collaborate APAC – Cobot Expo. This year’s theme is entitled ‘Collaborate’ and will feature some of the company’s prominent global spokespersons as part of an informative panel discussion.

Register for the live event on universal-robots.com/sg/collaborate-apac-cobot-expo-2021.

Universal Robots (UR) was founded in 2005 to make robot technology accessible to all by developing small, user-friendly, reasonably priced, flexible collaborative robots (cobots) that are safe to work side-by-side with people. Since the first cobot was launched in 2008, the company has experienced considerable growth with the user-friendly cobots now sold worldwide. The company, which is a part of Teradyne Inc., is headquartered in Odense, Denmark, and has regional offices in the United States, Germany, France, Spain, Italy, UK, Czech Republic, Poland, Hungary, Romania, Russia, Turkey, China, India, Singapore, Japan, South Korea, Taiwan and Mexico. In 2020, Universal Robots had revenue of USD 219 million. For more information, visit universal-robots.com.