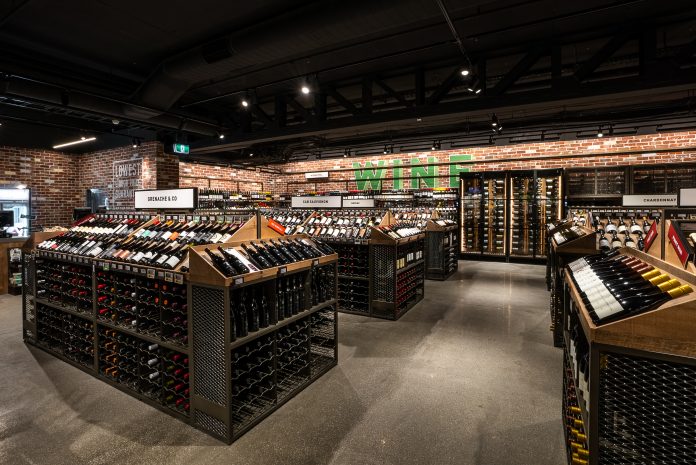 Following the launch of its flagship store design in South Melbourne in March, Dan Murphy’s has unveiled a further three new stores across the country.

Next week, Dan Murphy’s Pasadena will be the first store in South Australia to get the new look.

“We know customers expect so much more from us than products on shelves, which is why we are increasingly innovating and using technology to create our stores of the future,” says Dan Murphy’s Managing Director Alex Freudmann.

Drinks education, discovery, technology and sustainability are at the heart of the customer experience in these new-look stores.

They all have central areas at the heart of the stores where customers can experience ‘magic moments’, which include wine and spirit tastings, a merchant’s corner with recommendations from the store’s resident Wine Merchant and on-demand ‘micro-classes’ hosted by in-store product experts.

Customers can also choose to educate themselves by exploring highlighted areas in the stores, which will contain engaging information about a specific product or segment.

“The most important thing for us is that the customer is in charge of how and what they want to experience or educate themselves about,” says Mr Freudmann.

The stores also have hyper-localised ranges, which have been developed by using customer insights and with a big focus on local.

For example, Dan Murphy’s Hyde Park now has a craft beer canyon with almost 500 different chilled beers, which is the retailer’s biggest craft beer range in the country.

“West Australians spend more on craft beer than any other state according to our sales data, and Dan Murphy’s Hyde Park is our best performing store in the entire country when it comes to craft beer. The approach to our stores of the future is to offer curated ranges based on what locals prefer, which is why we wanted to make sure this store has our widest range of craft beer in the country,” says Mr Freudmann.

Almost 40 per cent of the craft beers in the store are from Western Australia.

“We are committed to continuing to support local brands and it’s great to see such a huge offering of West Australian craft beers. It’s an exciting time for Australian brewers,  winemakers and distillers – there is a lot of innovation in the space, and we are seeing customers choosing to support local products more than ever,” he added.

All stores also have electronic shelf labels (ESLs), which will “save hours of work every week for the team” as price beats take place on a daily basis.

“An average store will beat hundreds of prices every week, and changing those price tickets can be quite time consuming for the team, but with ESL tags, it’s simple and efficient. We are also seeing that stores that have ESL use 90 per cent less paper, so the technology will help us reduce paper usage,” says Mr Freudmann.

The electronic shelf labels also have NFC (Near Field Communication) technology, so customers can simply tap the shelf label with their smartphones to get more product information or read customer reviews about a specific product.

In total, the retailer plans to complete 10 stores with the new flagship design during this financial year.