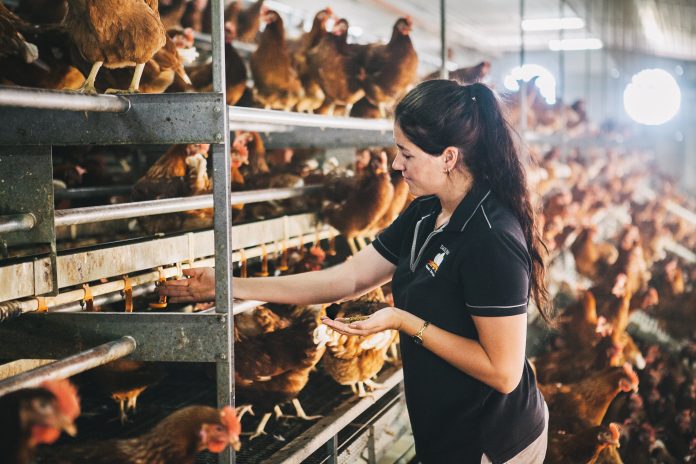 Australians are big consumers of free-range eggs. They like their eggs to be from hens that roam free on green pastures, or at least large barns, rather than being kept in cages. However, this freedom can increase danger to hen health.

Cage free hens have greater freedom to roam and forage, but a risk is that they can flock together and ‘pile up’, which can result in them being smothered. While it’s not common, if a pile-up does occur, farmers currently have no warning system to alert them that this might be occurring.

This issue is being tackled by researchers from the University of Technology Sydney (UTS), who have developed what is said to be a world-leading artificial intelligence (AI) based system to monitor the movement and behaviour of cage free hens.

Professor Jian Zhang and his team from the Multimedia Data Analytics Lab in the Global Big Data Technologies Centre, based at UTS Tech Lab, recently trialled a real-time video monitoring system on an egg farm in Windsor, NSW.

He says the non-intrusive solution has compelling advantages over existing management systems.

“The farm in this project that is trialling the technology has an average of 8000 hens spread across multiple sheds, and it’s difficult for farm staff to continuously monitor hen behaviour,” he says.

Several basic real-time trials on video footage have been run successfully. The UTS team includes poultry and animal behaviour specialists to help analyse and interpret hen behaviour. The next phase of the project will include a deeper analysis of behaviour such as drinking, feeding, foraging and standing.

There are also plans to build a mobile phone app that can alert supervisors to potential trouble. The app will include machine-learning technology to improve the system, with feedback from users.

Dr Zhang says the technology will help egg farmers automatically monitor and measure their flocks, with a view to timely recognising and intervening in negative behaviour and enhancing positive behaviour.

“This will allow 24/7 flock welfare analysis on commercial farms,” he says.