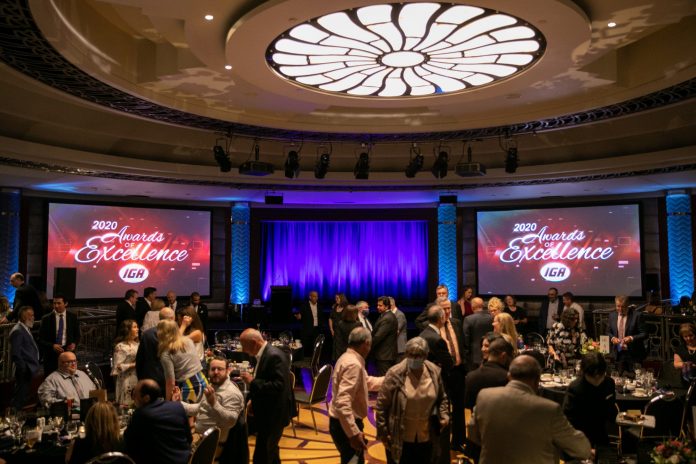 Leading IGA stores were recognised at a ‘new look’ IGA Awards of Excellence, beamed across the nation via satellite for the first time ever on 27 November.

The awards recognise and celebrate the achievements of independent retailers and their teams nationally who play a vital role in their local communities and are judged on a range of criteria including customer service, community pride, department excellence, brand values, merchandising and the store’s overall performance.

Due to Covid-19 restrictions and border closures, the award ceremonies followed a very different format than the traditional IGA National Awards of Excellence hosted on the Gold Coast every year. Events were instead held across the country, with Master MC Shane Jacobson hosting guests at the Hyatt Regency Sydney, with live crosses to Tim Campbell at the Park Hyatt in Melbourne, Giaan Rooney at the Hilton in Brisbane, and Jo Beth Taylor at the Crown in Perth.

Metcash Food CEO Scott Marshall said, “The IGA Awards of Excellence acknowledge the hard work, commitment and excellence IGA stores across the country have demonstrated throughout the year. This year’s winners once again reflect the strength of the IGA network and the efforts that they go to support their local communities as only they know how.

“In a year that has been like no other, it is so important to further recognise the efforts of all IGA retailers who have gone over and above, day in and day out, to ensure that their local communities were looked after. Therefore, rather than inducting just one retailer into the IGA Hall of Fame, we decided to induct the entire independent network to recognise their outstanding efforts on the front line, overcoming the many challenges of 2020. Congratulations to all our winners.”

The major award winners are:

Outstanding stores were recognised including:

Other IGA Awards of Excellence winners include:

Full coverage of the Awards will be featured in the upcoming Retail World January/February 2021 issue.