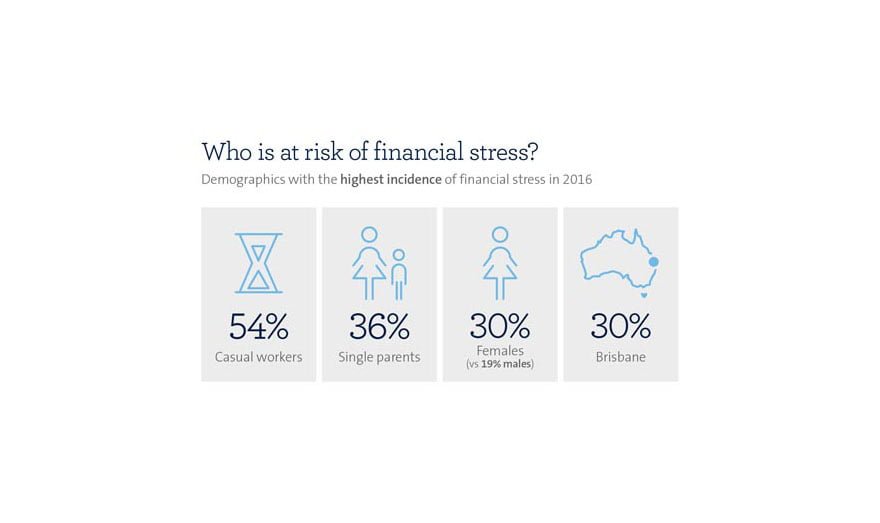 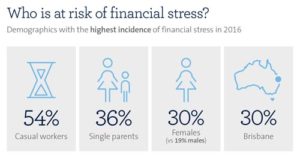 According to new research from AMP, one in four surveyed Australian workers has low confidence in their financial position and struggles to make ends meet.

The research, undertaken for AMP’s ‘2016 Financial Wellness’ report, found that only 48 per cent of respondents were confident in their financial position, a decrease from 54 per cent in 2014. This comes despite a 6.3 per cent increase in disposable cash held by respondents.

The research also found that employees surveyed who were categorised as ‘financially stressed’ lost on average 6.9 hours of productive work a week and were absent about 1.3 hours a week due to stress-related sickness.

Other key findings from the research included:

“Financial stress is a common occurrence in the Australian workforce, with more than 2.8 million employees, representing one in four workers, under financial stress in 2016,” AMP Director Corporate Superannuation Vicki Doyle said.

“People who experience financial stress are more likely to be unable to work due to stress-related sickness, which can affect their health and morale in addition to lowering workplace productivity – at an estimated cost of $47 billion in lost annual revenue for employers.

“It’s important we find ways to address levels of financial stress in the workplace. We know the real difference financial goals can make in preventing and overcoming financial stress: Australians who have clearly defined goals are much more likely to be financially secure.”

Australians spent $94.6 billion in supermarkets in the year to March 2020, with Woolworths Group and Coles Group taking 67.5% of that total. Data from...
Read more
Business Insights

Automating in businesses for survival

Two-thirds of Australian businesses report revenue decreasing during the COVID-19 pandemic in comparison to the same period the previous year. The recession which was caused...
Read more
Events

This Show is Running!

Media Release 6 July, 2020 The organisers of the Foodservice Australia trade exhibition have confirmed the show will be running in Sydney from 8-10 November as...
Read more
Business Insights