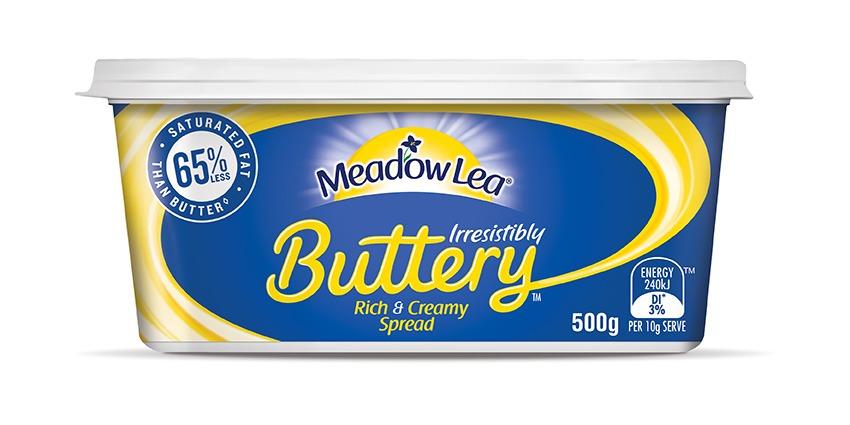 Goodman Fielder’s MeadowLea brand worked with the Saltmine Design Group to update the visual identity of its Buttery spread.

MeadowLea Buttery Rich & Creamy Spread has a buttery taste and the added benefits of containing 65 per cent less fat than butter and being easier to spread.

Saltmine’s brief tied in with Buttery’s move from a round to rectangular packaging format, and the expansion of the range to include a new variant, Buttery Whipped Light & Fluffy Spread.

Saltmine’s strategy evolved the Buttery design to position MeadowLea as an innovator within the category, reigniting consumer interest in the segment by bringing to life the strong taste and texture credentials of the Buttery range.

The result is a commanding visual identity featuring an eye-catching yellow swirl that, on the Buttery pack, connotes the rich and indulgent product, and, on the Whipped pack the light and fluffy texture of the new variant.

In addition to the tubs, Saltmine designed a range of tub inner liners with serving suggestions for each of the products, including images of Buttery on top of hot corn on the cob and warm muffins.

Saltmine’s next brief from MeadowLea was for the new MeadowLea Breakfast Twists range, aimed at meeting the needs of parents seeking breakfast inspiration for their family. The range includes chocolate, caramel and cinnamon variants that can be used in a variety of applications, including on toast, crumpets, pancakes, waffles, or on a sandwich.

Saltmine added family fun to the design by creating a character for each flavour – which doubles as creative inspiration in the kitchen for mums. The Caramel Crumpet Bear, Cinnamon Pancake Face and Chocolate Robot Toast characters feature on the tub packaging as well as the tub inner liner.