New $5 banknote to circulate from September 1 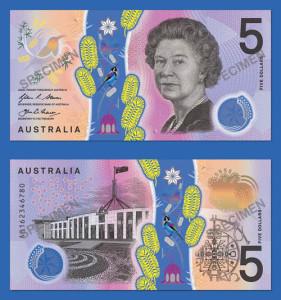 The Reserve Bank of Australia has released images of the new $5 banknote, which incorporates key aspects of the existing design with new features.

For ease of recognition and to minimise the disruption to businesses, the colour, size and people portrayed on the current $5 bill will remain. Among the additions is a new ‘tactile’ feature to help the vision-impaired distinguish between different denominations of banknotes, and new security features, including a distinctive top-to-bottom window, to help keep Australia’s banknotes secure from counterfeiting.

The designs are the culmination of a process of extensive consultation with subject-matter experts and the cash-handling industry, as well as qualitative research involving focus groups.

Each banknote in the new series will depict a different species of Australian wattle and a native bird within a number of the elements. On the $5 banknote, these are the prickly Moses wattle and the eastern spinebill.

Information on the new design and security features (which will be common to all banknotes in the new series) and how they work will be part of a public awareness campaign over coming months.

Issue of the new $5 banknote will start on September 1, although it will take some time for the new notes to be widely circulated. The current series of banknotes can continue to be used, even after the new banknotes are issued.

Emily Devon - October 1, 2020 0
If you’re part of the world where winter is well and truly over, and the sun is already beginning to beam – you may...

It’s ‘No Small Plan’ for Thankyou

Avo look at this!