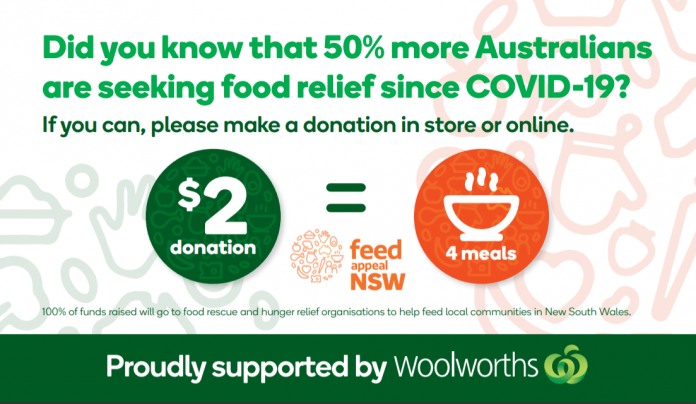 News Corp Australia and Woolworths today announced a joint national campaign to support Feed Appeal amid a sharp jump in the number of Australians suffering economic hardship from COVID-19 and seeking food relief.

Feed Appeal, a national not-for-profit organisation that provides capacity and capability grants to local food relief charities, has reported a 50 per cent rise in people seeking food relief since COVID-19 began, many for the first time.

This follows a rise in the number of Australians experiencing food insecurity in 2019 to five million, up one million compared with 2018 [‘Foodbank 2019 Hunger Report’].

The four-week campaign, which starts today, encourages readers and Woolworths customers to help feed a family in need by making a $2 donation at any Woolworths checkout or when shopping online.

Woolworths is kicking off the Appeal with a $100,000 donation which is the equivalent of 200,000 meals to those in need.

Feed Appeal was co-founded by News Corp Australia’s Leader Community News and FareShare in 2009 with a mission to help feed Australians.

News Corp Australia’s annual support of Feed Appeal started in June and, within one week, raised $25,000 with most donors indicating they had read the coverage or seen the advertising. Almost 70 per cent were new donors to the Feed Appeal.

News Corp Australia’s Community Ambassador Penny Fowler said the increase in demand for food relief across the country meant this year’s Feed Appeal was the most important one to date.

“For over a decade we have supported Feed Appeal’s mission to feed Australia. 2020 is shaping up as the toughest year in at least a generation with drought, bushfires and now coronavirus having a significant impact on our community that shouldn’t be underestimated.”

The Woolworths activation is the largest fundraiser for the Feed Appeal and this year, will aim to match the record raised in 2019 which provided over one million meals to nourish local communities.

Woolworths Chief Marketing Officer, Andrew Hicks said “Food insecurity is an incredibly real issue which is why it is more important than ever that we continue to support our long standing food rescue partnerships as they help people in need in communities across the country.”

Feed Appeal CEO Katherine Gokavi-Whaley said, “This year the need is greater with an increase in the demand for food relief. Together we can do more if every Woolworths shopper gave as little as $2 it would go a long way to help struggling Aussies in their local community. While you shop to nourish your family please give to support another family.”

Full page advertising will run in News Corp Australia’s metropolitan and regional mastheads and in the August editions of food magazines delicious. and Super Food Ideas. The campaign also includes digital advertising across the network and ongoing editorial support.

Feed Appeal is powered by Newman’s Own Foundation and guarantees 100 per cent of donations go towards local food relief charities. For more information visit feedappeal.org.au, and to make a donation to the Feed Appeal visit any Woolworths store.