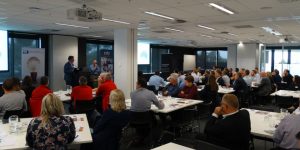 The Profit Protection Future Forum: Total Retail Loss conferences were held in Melbourne and Sydney and workshops were led by Professor Adrian Beck to shed light on how grocers could gain new profits and suffer less losses.

Professor Beck presented findings based on his Total Retail Loss concept and trends in global loss prevention, revealing a case study from three European grocers that netted a total loss of €35 billion ($54.22 billion). In that total amount, 53 per cent was attributed to wastage, 25 per cent to lost profits from out-of-stocks and 22 per cent to theft. According to the grocers who practiced the Total Retail Loss methodology, they experienced a 17 per cent jump in profits.

Professor Beck also addressed the changing context of loss in retail due to the profound changes in the retail environment, specifically self-scan and mobile technologies. Following a 24-month study, conducted across 14 major US and European retailers in grocery, home improvement and general merchandise verticals, it was found that the increase in loss through self-scan was a staggering 14 per cent. Self-scan checkouts were also found to be vulnerable to customers pretending to pay, putting in an incorrect pin and then leaving the store without being detected.

“The Profit Protection Future Forum [PPFF] was formed to provide a platform to facilitate and support the Australasian retailer and supplier community to collaborate in creating, exploring and learning effective profit enhancement strategies,” Head of Profit Protection for Next Athleisure Mark Boyd said.

“The Total Retail Loss conferences specifically addressed challenges around new technologies and the changing roles of loss prevention in Australia and New Zealand. The PPFF Steering Committee believes that collaboration among retailers in the most effective way to combat profit protection issues in our region.”

The conference was wrapped up with a robust discussion among retailers who shared their challenges with loss prevention in Australasia, citing a challenging retail environment and shrinking budgets as some of the issues faced locally.

MEDIA RELEASE 16.09.2021 Nestlé is laying out its plans to support and accelerate the transition to a regenerative food system – one that aims to...
591FansLike
857FollowersFollow
666FollowersFollow