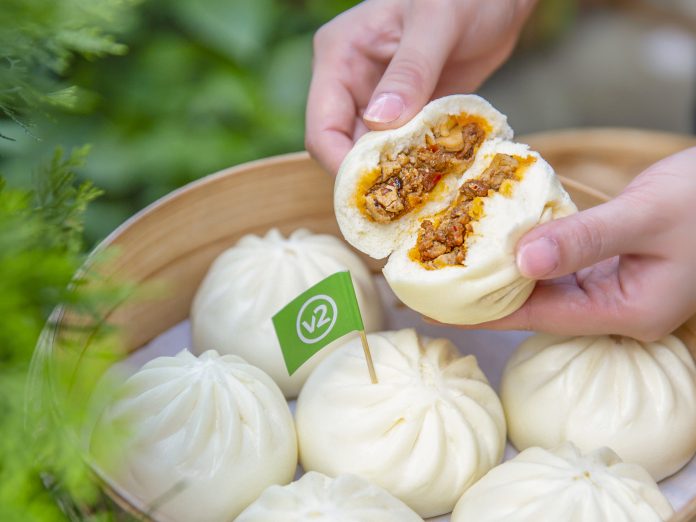 Headlining the new partnerships is Shuhui. Said to be one of China’s largest steamed bun manufacturers, Shuhui has an estimated 30,000 distribution points across China.

In addition, v2food has welcomed a collaboration with Dong Chi. Serving over 200,000 members per month, Dong Chi is a “leading player of nutritious weight management ready meals”.

Duoguo, said to be China’s first domestic food content service platform, has also signed on as a strategic partner. The platform, according to v2, has 62 million active users per month, with almost 400 million downloads to date.

v2food founder and CEO Nick Hazell says his company is committed to delivering delicious, culturally relevant plant-based protein options to consumers all over the world. He adds that v2’s new partnerships are an exciting platform to further connect with Chinese consumers and bolster the company’s global competitiveness.

“China is the world’s largest consumer of meat, so it’s a very important market for us,” says Mr Hazell.

“As a global player, ensuring we align with like-minded partners is important to us as an organisation. We share our new partners’ ambition to build a better food future while paying homage to China’s rich heritage of Asian cuisine.”

Since entering the Chinese market in June, v2food says it has taken a lot of actions to localise its offering in China.

Beyond its v2mince, v2 has also created ready-to-cook products, tailoring to the needs of those cooking and eating more at home after the pandemic.

Moving forward, v2food says it will continue to deepen its Chinese ties and expand its scale in China. This includes the local production of v2dumplings, v2buns, v2lasagna, and v2 pork rolls.

In the future, v2food notes that it will work with more partners, focusing on QSR, foodservice, and catering channels across a range of Chinese and western-style dishes.