Woolies’ new beer is the ‘best thing since sliced bread’ 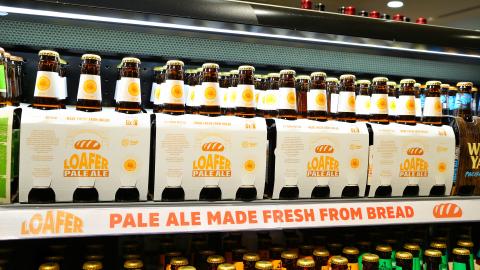 Unsold loaves of bread from Woolworths have been repurposed and brewed into a limited-edition pale ale.

The beer, called Loafer, will be sold exclusively in BWS and Dan Murphy’s.

The new product will help raise funds for Feed Appeal. This will put meals on the table for Australians impacted by food insecurity.

Dubbed as the Woolworths Group’s “first circular economy beer”, more than 350kg of leftover bread from Woolworths has been diverted from potential landfill to help create the unique brew.

Woolworths, as a business, is constantly challenging itself in the sustainability and community space, says Head of Sustainability Adrian Cullen.

“The ability to divert surplus food away from landfill, and to help support our local food rescue partners to help feed Australians that would otherwise go hungry, is a critical part of our day-to-day operations and support of the community,” he said.

“We’re excited to bring to Australians our first circular economy craft beer. For every six pack of Loafer purchased, you will not only help to put a meal on the table for someone in need, but you will also be enjoying a beer that has helped divert unsold loaves of bread from heading to landfill.”

Loafer has been made by Tribe Breweries, based in Goulburn, NSW.

Josh Gaudry, Head of Innovation at Tribe Breweries, says the company wanted to create a “beautiful craft beer”. He also mentions that Tribe Breweries were excited to be able to support Feed Appeal and Woolworths in their fight against hunger and food waste.

“Through collecting rescued bread from Woolworths, we were able to incorporate this into the base of our brew, and lovingly crafted each beer with the aroma of fresh toast to produce an easy-going pale ale with bright hoppy aromas reminiscent of pear and pineapple,” Mr Gaudry said.

“If you ask me, it’s the best thing since sliced bread.”

Woolworths says that funds raised through the sale of Loafer goes directly to support Feed Appeal.

According to Feed Appeal CEO Katherine Gokavi-Whaley, the not-for-profit organisation is here to help everyday Australian families who rely on food charities in their local community for their next meal.

“All money raised through the purchase of Loafer goes directly to community food relief charities to supply ovens, freezers, cool rooms, transport and other vital infrastructure to help them store, cook and share meals often cooked from rescued food to meet the growing demand for food relief,” she said.

“We are pleased to see that there is now good beer, doing good on the market.”