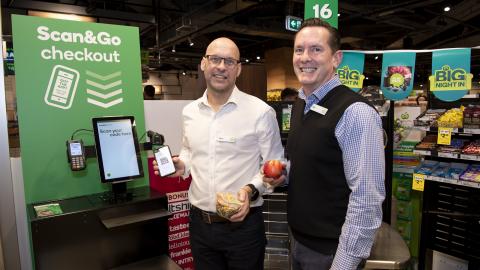 Consumers in the Sydney CBD can now skip the check-out queues at four Woolworths Metro stores as the supermarket expands its Scan&Go trial to more locations.

The offering was also recently launched at Woolworth’s renewed full-line supermarket in the Sydney suburb of Mona Vale.

According to the retailer, Scan&Go allows customers to scan goods with their smartphone as they walk through the store and pay in the app before tapping off at a dedicated kiosk.

The expansion of the trial to more sites follows the success of Scan&Go at Woolworths Double Bay, Sydney over the past 10 months.

“Our customers lead busy lives and they want us to make shopping more convenient than ever before,” Woolworths Group Head of Payments and Financial Services Paul Monnington said.

“The trial in our Double Bay supermarket has been a success, with positive feedback from our customers and team, and we’re pleased to now extend the benefits of Scan&Go to more shoppers.

“Most customers in our CBD Metro stores just want to duck in and out for a few items, so we expect the speed and ease of Scan&Go will be quite a popular offer in this setting.

“We’ve also taken the opportunity to trial Scan&Go at Mona Vale following the renewal of the supermarket.

“This will allow us to test the offer with even more customers in a different setting, so we can determine the best role for it in the future.”

The Scan&Go app is available to download on the App and Google Play stores. App users must be Woolworths Rewards members and will need to upload an accepted credit or debit card within the app before shopping.