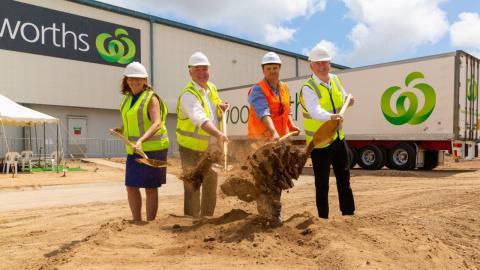 Upon completion, the site will more than double its footprint to 10,000sqm. Woolworths says this will make it the largest food and grocery distribution centre in North Queensland and significantly boosting the capacity of warehouse to service local stores.

At full capacity, up to 340,000 cartons a week will move through TRDC bringing customers fresh fruit and vegetables, meat, eggs, milk, groceries and liquor from hundreds of suppliers. The TRDC currently services 39 Woolworths supermarkets spanning from Sarina to Weipa.

“It will not only allow for more frequent, faster and fresher deliveries to local stores year-round, but also help build much needed resilience in our North Queensland supply chain network in the event of natural disasters,” he said.

“We’re more than doubling our footprint at this distribution centre, which means we can hold many more essential items locally in the event of flooding or cyclone.

The expansion will create 30 additional permanent jobs at the TRDC along with an estimated 170 construction jobs throughout the seven-month build.

Townsville Mayor Jenny Hill, who joined an event on-site to mark the start of construction, said the investment being made by Woolworths was a vote of confidence in the city.

“The expansion is great news for Woolworths and the Townsville community. It is exciting to have this project and other developments underway across our city.

“Townsville’s location makes it the natural choice for warehousing and distribution for northern Queensland.”

The expansion of the TRDC was first announced in February 2019 as part of a broader $20 million investment in the local store and supply chain network.

The works are expected to be completed around mid-2020 and the existing parts of the TRDC will continue to service Far North Queensland stores during construction.