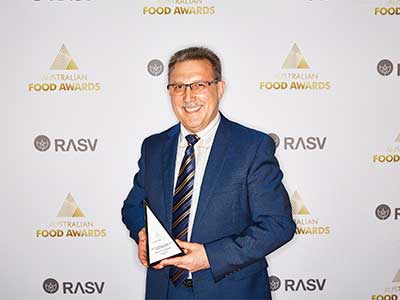 The annual dinner conducted by the Royal Agricultural Society of Victoria (RASV) awarded 14 Champion trophies to 11 of the best food producers nationwide.

RASV CEO Mark O’Sullivan says this year’s AFA winners were no exception to the home-grown excellence seen in previous years.

“It’s extremely important for Australians to not only know and see where their food comes from, but to also be proud and celebrate the remarkable achievements of our Australian growers and producers, who create phenomenal produce day in and day out,” he said.

“We congratulate all of the 2017 medal and trophy winners and thank our esteemed panel of judges for their contribution to this year’s awards.”

The Champion Small Producer trophy was awarded to Enigma Fine Chocolates from the ACT, and Victorian producer Bertocchi Smallgoods won the trophy for Champion Large Producer.

RASV also awarded 20 Consistency of Excellence awards to producers whose products have won an AFA gold medal for three years in a row, with an impressive 12 awarded to Dooley’s Ice Cream for its ice-cream and gelato.

Champion Large Producer Bertocchi Smallgoods’ Marketing and Merchandise Manager Tony Rapone said of the award: “This achievement is an enormous honour to all our team of dedicated staff who work tirelessly to manufacture the finest-quality smallgoods Australia has to offer.

“Bertocchi will continue to maintain its reputation to focus on artisanal quality excellence and raise standards of ham, bacon and continentals product quality to demonstrate leadership of our industry.”

“These awards demonstrate the level of excellence in the standard of products proudly manufactured by Bertocchi,” Mr Rapone said.

Emily Devon - October 1, 2020 0
If you’re part of the world where winter is well and truly over, and the sun is already beginning to beam – you may...

It’s ‘No Small Plan’ for Thankyou

Avo look at this!