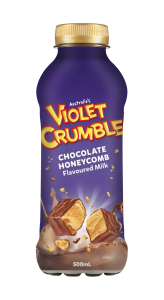 This isn’t a drill – Robern Menz and Bickford’s are teaming up for… yes, you guessed it, Violet Crumble flavoured milk.

In August, a leaked photo revealed the Violet Crumble and Bickford’s collaboration, sending consumers into a frenzy.

“We are thrilled to confirm that we have collaborated with Bickford’s to launch the only nationally available chocolate honeycomb flavoured milk in Australia,” says CEO of Robern Menz, Phil Sims.

“Violet Crumble is an iconic Australian brand and flavoured milk is part of Australian pastime, so we knew that chocolate, honeycomb and milk would make sense.”

New information reveals that people in South Australia and Northern Territory are the largest consumers of flavoured milk and iced coffee at 20 litres per year – almost double the national average.

“There has been huge interest from our customer base already and we are buoyant on the potential of this collaboration.”

It will also be available at Romeo’s and Foodland supermarkets across South Australia, The FruChocs Shops and Bickford’s online store, Sippify.

All of the signs are pointing towards the health trend when it comes to beverages in FMCG or convenience. Australia-based natural nootropics beverage company, Shine...
Read more

Communicating via the sticky note

While grabbing groceries from a local supermarket, I noticed a build-up of people waiting outside of the bottle shop next door. As I peered...
Read more
439FansLike
541FollowersFollow
643FollowersFollow