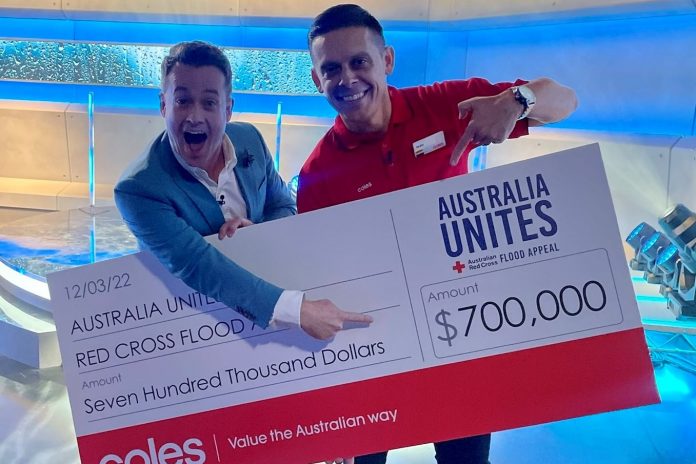 According to the retailer, 44 pallets of supplies reached isolated residents in the North Richmond and Wilberforce region via boat. Another semi-trailer loaded with over 2500 boxes full of supplies arrived at Lifeline’s donation centre in Lismore.

Lismore MP Janelle Saffin was on hand to accept the load on behalf of the Lismore community and to thank the Coles team.

“It was great to visit the Lismore Showgrounds and see the fantastic work being done by Coles staff in helping distribute food to flood affected locals. A big thank you to all the Coles team,” she says.

To date, Coles says it has raised more than $350,000 from generous customers. The retailer will double the amount raised up to $1 million until tomorrow (15 March).

“We could not be prouder of our team in Queensland, Lismore and the Northern Rivers,” he says.

“And to our customers, we just want to say thank you for all your patience as we’ve worked through the logistical challenges of this disaster. Our hearts go out to everyone impacted – including our own team.”

With Coles’ supermarket at Lismore “significantly affected” by the floods, the nearby Coles store at Goonellabah has remained open to support the Lismore community, receiving multiple deliveries every day to ensure that stock remains on shelves. Customers in flood-affected areas will also be able to access fresh food and other grocery items through the reopening of Coles Online delivery.

The Coles store at Goonellabah has also welcomed the Coles Lismore team, providing a temporary home where they can remain employed.

Coles Regional Manager Andrew Sneesby says every team member and customer that you talk to has been significantly impacted by the floods, and as you drive around and see the devastation you can’t not be affected by it.

“Together with our customers, suppliers and team members, we’re doing everything we can to support the community through delivering donations to where it’s needed most and ensuring that our nearby store in Goonellabah receives multiple deliveries each day to keep stock on the shelves,” he says.