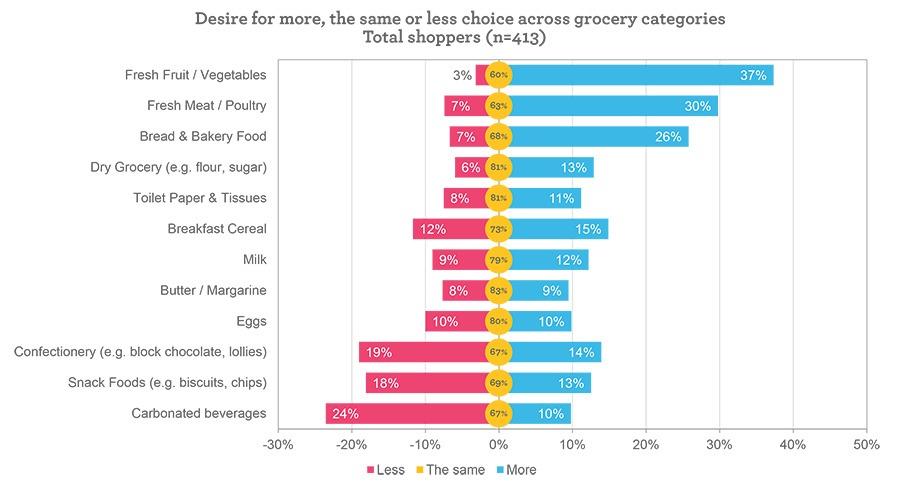 As the  supermarket price war develops further, it is time to look at consumer likes and dislikes.

By David Burton and Colmar Brunton.

The May Shopper Pulse addressed range and pricing – issues that will become more critical to supermarkets as Woolworths attempts to claw back lost market share. At the same time, Coles is winning the battle when it comes to perception on great-value promotions. The others are treading water and looking for a way to move on.

As Woolworths and Coles ready themselves for results announcements on their third-quarter sales, the verdict is in when it comes to an informal ‘SWOT’ analysis by the Shopper Pulse panellists. The two chains fared better on particular measures – Woolworths on range, Coles on pricing.

Ironically, ALDI is recognised as having the lowest prices, so perhaps the escalation to a full-scale price war is just a waste of time and money.

Consumer perceptions do not change overnight and this month the research highlights that while Woolworths is famous for its wider range of goods, most of its customers recognise they are trading this off against prices that are not as competitive.

Woolworths has discovered this itself, hence the $500 million investment in lower prices to reclaim lost ground announced at its first half-year profit result briefing.

Coles is perceived to be cheaper than Woolworths, but not as low as ALDI. Interestingly, the boys from Status Quo are back on TV telling Coles customers that ‘Whatever ya want’, it is at low prices. Woolworths gives shoppers a  ‘Cheap, cheap’ message that could be an over-produced TVC in some minds.

It really is a duopoly

Both Coles and Woolworths hate the term ‘duopoly’ and Coles CEO John Durkan has recently stated that there are plenty of other stores available. However, when it comes to the main shop, they both command high shares.

Coles edges Woolworths by a margin of seven points, with almost half the panel going to Coles for their main grocery shop. Unsurprisingly, Costco is not rated, as the numbers shopping regularly in its small number of warehouses does not quite measure. ALDI can claim seven per cent of main grocery shoppers, while IGA rates three per cent of shoppers.

As most of us in the industry know, shoppers go to more than one store, so Coles and Woolworths, particularly in shopping centres, will be trading customers regularly.

Over time, Coles has consistently used its ‘Down, Down’ campaign to give low-price confidence to its shoppers. Last November, Coles introduced the ‘Everyday’ tag line when reinforcing its pricing on a number of lines. Woolworths, on the other hand, is using the ‘price was/is’ tagline on several lines to show that it is serious about becoming cheaper on groceries and essentials.

Meanwhile, the independents are unable to keep up with the pace on price cuts across the board and, while there is a core product range at SUPA IGA that will be competitive with the chains, it is supposedly a changeable range with some lines coming in as others drop out, according to former Metcash supermarkets CEO Fergus Collins.

IGA and the rest of the independents are still selling their services as the attraction to customers, rather than competitive prices in most cases. For many IGA retailers, the top-notch formats in particular, this business model will continue to serve them well.

When asked to choose from a list of statements about their main store, Coles’ top five list had two ratings, which is a commentary on what has been happening over the past three years. The third highest response (41 per cent) was ‘attractive promotional offers’. This was followed by the fourth highest response, ‘best loyalty/rewards program’.

Given that Coles played catch-up to Woolworths on loyalty, it has scored higher than its rival. Only one-third of Woolworths’ main shoppers thought that ‘Everyday Rewards’ was the best.

Catalogue advertising still works, and this is evidenced by out-of-stocks on key lines that are heavily promoted – at ALDI in particular, where its ‘special buys’ are advertised while ‘stocks last.’ Visit an ALDI late on Wednesdays or Saturdays and you are guaranteed to be disappointed.

Recent supplier reports on Woolworths’ promotions indicate that the really good specials on top brands are selling through quicker and also gaining more off-location support in-store. Coles has limited its promotions as it reinforces its ‘Everyday value’ proposition, but Coles shoppers still rate its promotions highly.

How ALDI, Coles and Woolworths compare

As both Coles and Woolworths experiment with reducing ambient goods ranges, there is a message from the Shopper Pulse May survey: there is a dichotomy on house brands. Some consumers want more house brands, others less. Some of the panellists feel there are too many products to choose from. Ranging to suit a disparate customer base is a complex business.

Only half of ALDI shoppers consider their store conveniently located. This is hardly surprising given the original ALDI concept to put stores where you might least expect them and then let the custom build. Of greater interest to ALDI from this research is that 95 per cent of its customers believe ALDI has the cheapest prices. So, it will be hard for the other chains and independents to prise these bolted-on customers away other than for items that ALDI does not range.

Woolworths customers recognise the wide range offered there, but know they pay higher prices for this privilege historically – new price reduction will take time to resonate. Coles has moved to ‘Everyday low prices’ on a number of key lines and its sales result following this change of strategy saw the Wesfarmers business unit post a sales increase of 3.8 per cent for Q3. This adjusts to a 4.5 per cent increase when the still-troubled liquor business is taken out of the equation.

The Naturally Good Expo is well subscribed to with exhibitors of all things good and healthy, including organic and superfoods. There is some correlation of what the expo is promoting and what this latest research tells us consumers want in-store.

More fresh and less snacks is the bottom line simple deduction from the responses. Consumers are keen to see less snack food, confectionery and soft drink and want more fresh fruit and vegetables, fresh meat and poultry, and bread and bakery items.

Considering my local Coles and Woolworths stores, of which there are two of each, Woolworths has the best produce department and you couldn’t ask for more choice.

One Coles is better stocked than the other. So why are shoppers bemoaning a lack of choice? The answer lies partly in the fact that not all Coles stores are in renewal mode and, when they are converted, the fresh offer is enhanced.

If ALDI shoppers are happy with the prices they pay at the check-out, they certainly don’t have as wide a range of fresh items to choose from compared to their chain rivals.

Cue the ALDI trial store at McGraths Hill, NSW, which displays produce at front-of-store and incorporates a small in-store bakery. ALDI shoppers are known to top up at other stores, so a basic produce range and lack of in-store bakery has not impeded ALDI’s growth over the past 14 years – it is on its way to 15 per cent market share over the next four years.

Another factor in the comment ‘we need more fresh’ is the fact Metcash is still some way off ‘freshening’ its stores. Metcash is aware that to be vibrant, competitive independents, IGA must put its fresh offer on par with the best the chains have to offer. This project is a key plank in maintaining the current independent share. Metcash has acknowledged this is a challenge and the trick is to roll out as many ‘Diamond’ standard stores as possible in the shortest period of time.

Breakfast cereal is a case worth examining. It is currently top-of-mind with the debate over health star ratings and Kellogg’s delay in coming on board. Kellogg has published the rating online and explained it is a lengthy process to change packaging on such a significant number of SKUs.

There is so much choice in breakfast cereals, yet 15 per cent of consumers would like more. Conversely, 12 per cent want less and almost three quarters of consumers are satisfied with the choices available.

Marketers must, at least, they will tell you, drive innovation. There is nothing wrong with that concept in principal, but many grocery shoppers find the array of shiny boxes and flexible packs on-shelf a drain on decision-making time.

So, as life becomes ever more frenetic, supermarket retailers will have to decide exactly how to satisfy customers in the face of shopping habits that include cherry-picking what we want from a number of stores.