Dolmio and v2food team up 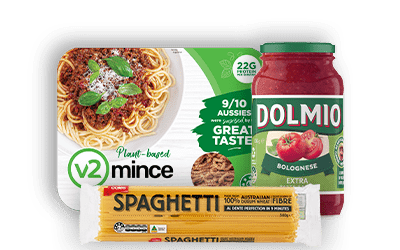 According to Mars Food Australia Portfolio Marketing Manager Global Brands Jade Lish, the trend of eating plant-based has been fast-tracked by the pandemic with more people now looking for healthier food options.

“At the same time, more people are cooking at home, and pasta remains among the top two meals made by Australians, whether feeding hungry families or a tasty dinner for one,” she says.

“In partnering with v2food, we want to give Aussies inspiration to turn their favourite pasta meals plant-based and tick all the boxes – Australian made, a healthier twist and no compromise on taste.”

“Partnering with an iconic brand like Dolmio, which is known for making the tastiest sauces, is a sure-fire way to deliver a delicious meal that’s guaranteed to satisfy everyone at the table, whether flexitarian, carnivore or anything in between.”

To launch the partnership, a discounted $10 meal bundle was made available on 19 January for a week from Coles. The bundle contains a Dolmio Extra Bolognese 500g sauce, a v2 plant-based mince 500g, and a Coles durum wheat spaghetti 500g.

The new partnership is being backed with a six-week Pinterest campaign that will share inspiration for plant-based versions of spaghetti Bolognese, lasagne and meatballs.

There will also be a social media campaign engaging influencers to create their favourite Italian meals using Dolmio and v2 plant-based mince.