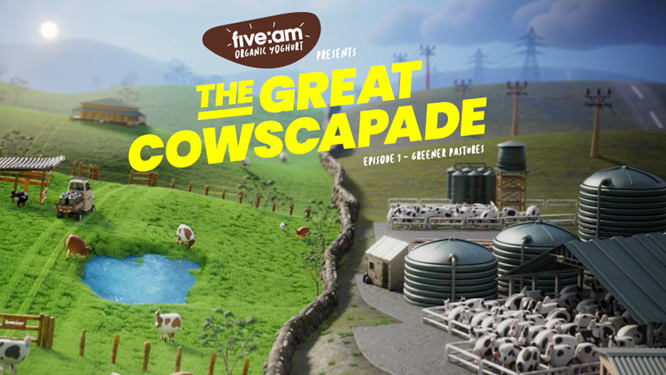 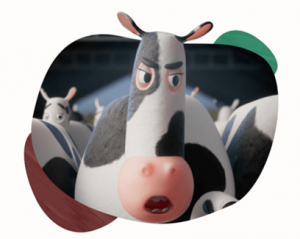 In a series of 15 and 30 second ads, Stevie attempts to escape her conventional farm for the lush, green grass of the organic farm next door.

In the first episode which launched on 1 June, she and her two best friends steal a tractor to attempt to jump over the boundary fence in a spoof of Steve McQueen’s thwarted bid for freedom in The 1963 classic The Great Escape. View the ad here.

five:am CEO Matt Stanton says the ads show how proud the company is to be organic.

“Demand for organic yoghurt is increasing every year because it’s tastier and better for you,” he said, “but not enough people know that organic farms are better for the planet, the cows and the farmers. It’s an easy way for us to cut our carbon emissions.

“Stevie MooQueen can see for herself how great organic farms are, so she’ll do anything to escape to one. She’s Australia’s bravest and most heroic cow!”

five:am has overhauled its packaging for the first time as it seeks to tempt more consumers to switch to organic. The range is available at Woolworths, Coles, IGA and independent stores.

“Australia has 23 million hectares of organic agricultural land, more than any other country.”

Mr Stanton said that Australia still lags behind the rest of the world.

“The sector’s growing, but from a very low base,” he said. “Organic farmers need more support from the government and retail to close the price differential between regular food and organic. This campaign represents a major investment and shows the faith we have in five:am as a brand. Once you taste it, you’ll never buy another type of yoghurt!”

“Studies have shown that organic farming uses 45% less energy, 20% less water and releases 40% fewer carbon emissions. Not only that, but organic cows are happier and produce healthier milk with higher levels of omega-3 fatty acids.”

The Works Creative Partner Iggy Rodriquez says, “Stevie is the kind of character everyone roots for. Ambitious and a little misguided. Her jealousy sparks a lifelong ambition to get over to the five:am organic side, which always ends in defeat. This sets up the premise for a long running campaign of adventures that will be both funny and touching!” Rodriguez continues: “It was a fun campaign to work on and I think we’ve found a way to make consumers think about the choices they’re making when faced with the many options in the dairy aisle.”