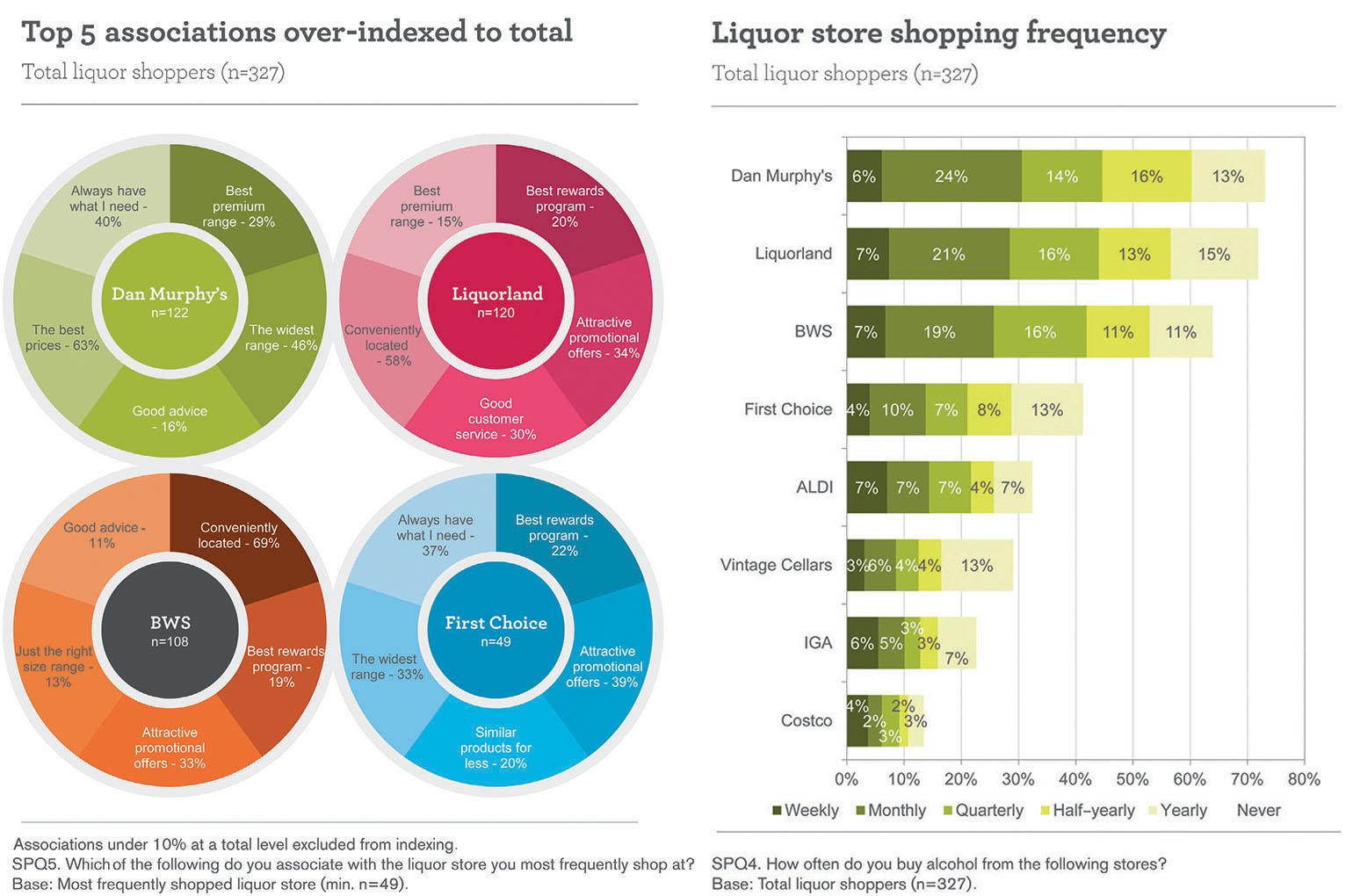 The big two have a stranglehold on the alcohol market.

When it comes to purchasing alcohol, the major banners run by Woolworths and Wesfarmers are the most popular.

However, IGA retailers that sell liquor are doing a good job, providing, in many cases, a convenience range rather than competing head on with prices that are unsustainable for them. Their stores are also shopped on a regular basis, albeit with lower percentages of consumers choosing IGA Liquor.

In terms of the monthly alcohol shop that the Colmar Brunton Shopper Pulse studied, ALDI attracts the most regular mission from its customers that visit weekly. So it seems that while liquor isn’t a weekly purchase for ALDI customers, they are happy to support the chain as their needs arise.

The explosion of brands and, more lately, big-box liquor stores, occurred from the early 1980s onwards. Previously, drinkers had to frequent hotel drive-ins and bottle shops. These were home to the beer wars of ‘13 to the dozen’, escalating as high as 16 bottles for the price of 12. This was a time when the 750ml glass bottle was king. Back then, a boutique sold clothes and the term did not apply to brewers until the early 1990s.

These days, the product choices seem endless, but only in some stores, according to the latest Shopper Pulse.

The latest research shows that those shopping for liquor frequent more than one store each month. Woolworths and Wesfarmers own five of the top six destinations surveyed.

Wesfarmers has been rejuvenating its liquor division for the past two and a half years and is seeing green shoots, but there’s a long road ahead.

ALDI liquor is a winner

ALDI has a keep-it-simple motto with alcohol: small range, kept in a secure location, with special promotions.

The big negative for ALDI is the lack of liquor opportunities in South Australia and Western Australia when its stores open in those states next year, due to licensing laws.

In spite of this negative, ALDI has a nailed-on following for its liquor offer in the eastern states and ACT. Almost half of those respondents shopping weekly at ALDI said they bought liquor there at least once a month.

ALDI would like to sell alcohol in all its stores, but differing state laws restrict this. Victoria was the first state in which ALDI sold liquor, and in NSW the category was introduced into stores after liquor licences were approved for specific locations.

Naturally, there was opposition at the time, but ALDI achieved the result it, and no doubt its customers, wanted.

Given the smaller footprint of an ALDI store and limited assortment, the range of liquor items is kept to key product groups with limited variants. ALDI does, however, sell alcohol online to back up its in-store offer.

Woolworths Ltd is under the gun in its hardware and general merchandise divisions, and its supermarkets are under extreme price pressure. Luckily, it owns Dan Murphy’s, which dominates the liquor segment in terms of big-box retailing, price and promotional leadership. The modus operandi at Dan Murphy’s is focused on beating any lower price offered by competitors.

While Woolworths is currently under siege, it can give itself a pat on the back for astute management of its liquor offer.

From a small Victorian chain of five stores acquired by Woolworths in 1998, Dan Murphy’s now has around 200 stores. It sits at the pinnacle of Woolworths’ liquor banner, which also includes BWS and online offerings from Cellarmasters.

Rival Wesfarmers struggles with its First Choice banner, which has attempted to take on the might of Dan Murphy’s since the Woolworths-owned operator began to roll out stores at a rapid rate in the early part of this decade. To date, it has not succeeded, partly due to store locations.

Wesfarmers’ Liquorland stores, which should be in prime position as they predated other chain offers, are now being remodelled in terms of simplified range and layout to win back business. The flybuys loyalty scheme works well at Liquorland – one advantage Wesfarmers has in liquor.

While the retail trade in liquor has become  centralised and more business is in the hands of the chains, the number of wineries is still high and competition for places on retailers’ shelves is fierce. Retailers also own brands, specially created for them from wineries that need to sell their vintages. These special labels let consumers quaff good-quality wine at low prices.

In the current retail environment, shopping regularly for alcohol will be sure to produce value as specials change weekly and Coles and Woolworths’ shopper dockets promote limited-time special offers.

IGA Liquor a point of difference

Many IGA retailers have stores with a liquor operation. Most say they are not competing with the chains, but simply offering value and convenience. Some stock middle-of-the-road wines that are everyday sellers, while others spice up the range with special vintage lines to increase margin.

Whatever the motive, having a liquor business that shares the same car park, back office and scan systems, with the capability of sharing staff – providing the requisite RSA certificate is held – is a benefit for these primarily IGA supermarket operators.

Metcash supplies some 1,200 IGA stores across the three tiers of the banner – not all have a liquor offer – through its Australian Liquor Marketers (ALM) division. ALM also supplies its own network of banners outside of the IGA supermarkets segment, including Bottle-O and Cellarbrations. Some of these outfits are stand-alone stores, while others are bottle shops and drive-ins connected to a hotel.

The ALM business is succeeding through picking its markets and encouraging new independent operators to join up for marketing support.

While the supermarket business that Metcash supplies is under extreme pressure, the distributor will be looking to incremental activity in its liquor unit as part of its turnaround strategy.

As possible thought starters for those running liquor stores, or about to embark on a new venture, a cross-section of Shopper Pulse panel comments makes interesting reading. With panellists asked to imagine what their ideal liquor shopping experience would be like, detailed descriptions were elicited.

For some, Dan Murphy’s already provides this ideal and was unlikely to be bettered.

“Close to home, easy parking and low prices” was one suggestion. “A diverse range of alcohol products, good-quality alcohol, attractive promotions and specials along with decent customer service” was another. Most agreed that the store had to be aesthetically pleasing.

Overall, Dan Murphy’s was the only banner mentioned when panellists considered the description of an ideal liquor store. This is not to say that the others don’t have the cachet or the product range and value desired: it’s just that Dan Murphy’s as a brand has sold itself to the liquor-consuming public across the nation.

Another interesting response was: “My most ideal liquor shopping experience would include a conveniently located store in the vicinity, a diverse range of alcoholic products, good-quality alcohol, attractive promotions and specials, decent customer service, the alcoholic brands I want, an aesthetically pleasing store both on the outside and inside, and the constant restocking of the items I want.”

As a shopper who frequents Liquorland for convenience, purchases online from Cellarmasters on special and occasionally drops into the local Cellarbrations outlet for a special wine, I have different reasons for each visit. As a visitor to IGA Plus Liquor stores for Retail World, I believe a compact range with the right mix and some decent promotions can still win the day.

For some shoppers, the big-box liquor store could just as well be the ‘too-big-box’ liquor store, as another panellist attests:

“I go into a conveniently located shop and find the drink I like best [usually a six-pack of cider or a bottle of Shiraz]. There’s no queue, I pay for my purchases and have a friendly interaction with the clerk, and get out and home as quickly as possible.”

So, the choice as to where to purchase alcohol remains varied in most states.

For established retailers, the current SA/WA legislation that keeps ALDI from selling a product that many of its customers purchase with some regularity in NSW and Victoria will tie ALDI’s hands until a decision is made to free up the market.