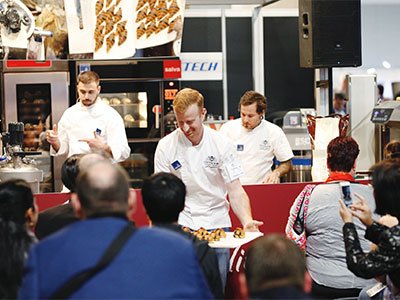 The figures are back from Fine Food Australia (FFA), held in Sydney last week, and show the largest number of exhibitors on record, with initial figures indicating the event attracted the highest attendance in the city for eight years.

Commercial Drinks, an event dedicated to the $16 billion on-premise liquor industry, was co-located with FFA, driving high numbers of foot traffic across both shows.

Another new addition was a Healthy Living Zone, where visitors could witness the rise of organic, natural, free-from and other healthy trends booming in Australia and around the world. There was also a Fit Out and Design Zone, a Start Up Zone, and a Worldskills competition, with some of the best chef skills displayed under pressure in front of judges and spectators.

One of the most anticipated aspects of the show was the newly formed Lion’s Den. Here, six businesses pitched their concepts to a panel of industry professionals in front of standing-room-only crowds.

“The 2017 show was an incredible success, with a level of attendance and support from Sydney that we haven’t seen for years,” Event Director Minnie Constan said. “We strive to set the benchmark for the industry when it comes to the opportunity to do business, learn and be inspired, and the preliminary results from this year’s event prove that we’ve absolutely done just that.”

Chit-Chat with KitKat for R U OK? Day