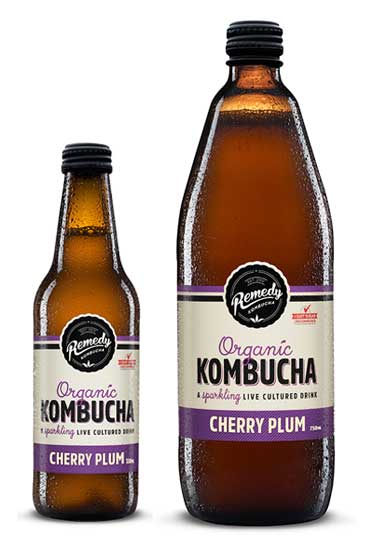 Popular kombucha brand Remedy has launched a new flavour, Cherry Plum, as the latest move in its mission to give retail-drinks fridges a makeover and offer consumers more real, healthy options.

The new flavour is said to pair sweet red cherry and native Aussie Kakadu plum to craft a live-cultured, naturally low-sugar drink that is “fruity, floral, and refreshing”.

“We are super-excited to be using a native Australian ingredient with Kakadu plum,” Remedy Kombucha co-founder Emmet Condon said. “We’ve been wanting to add native ingredients into the mix since we started out.”

Remedy Kombucha is made following a traditional fermenting process, involving sweet tea and a live culture known as SCOBY (symbiotic community of bacteria and yeast).

Like its siblings in the Remedy range, the new flavour naturally contains no sugar, backed by an official tick of approval from ‘I Quit Sugar’. It is also packed with live cultures and organic acids (aka short-chain fatty acids) that are claimed to be good for gut health and overall wellbeing.

“We’re really proud to make drinks that are not only really healthy, but also really tasty,” Mr Condon said.

“We want as many people as possible to be able to enjoy a Remedy as an alternative to all the sugary and fake-healthy drinks out there. Our drinks are healthy not only because they are naturally free from sugar, but also because they are full of goodness.”